West High Alum Evan Marwell: “How can I maximize my impact on the world?” 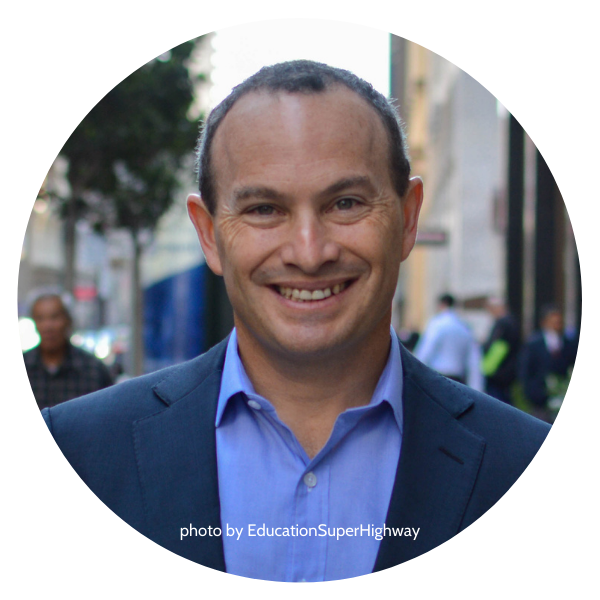 Mrs. Murray’s third-grade classroom at Shorewood Elementary School was unlike any other Evan Marwell had been in before.

“For math, she let me play cribbage with other students,” recalls Marwell, a 1983 West High School alum Zooming from his San Francisco home. “I never understood why I was allowed to play during school, but I realized later in life it helped me with my quick math thinking and strategy.

“Her classroom was set up in a way for every student to pursue their own individual interests and I think that created a spark for my creativity.”

Marwell credits the creativity and critical thinking skills seeded in Mrs. Murray’s classroom with helping propel him to a career as a serial entrepreneur.

Now, he has launched a second chapter of giving back. He’s created an education nonprofit that catalyzed connecting 99.3% of public school classrooms to high-speed internet in the past decade and is now working to close the digital divide in American homes.

“I want to be remembered as a guy who had a lot of impact in the world,” says Marwell, who speaks passionately during the interview. “How can I maximize my impact on the world by leveraging my skills, experiences, and relationships, in a way that truly can impact people for the better?”

His father, Gerald Marwell, was a University of Wisconsin-Madison sociology professor known for his pioneering research on social cooperation and social movements before his death in 2013.

His mother, Bobbie, was an MMSD psychologist and coordinated the district’s Title 1 federal funding program to provide equity in education. She also was one of the Foundation’s early leaders and remains an ardent supporter from her home in New York City. She has recruited Evan to get involved in the Foundation, along with her daughter Nicole, an associate social work professor at the University of Chicago.

And fundamentally, education has been my pathway to opportunity,” he says “ and I have a fond place in my heart for Madison public schools.”

Beyond Mrs. Murray, he remembers Mrs. Daniels, his 10th-grade English teacher at West High School for giving him the “incredible gift” of helping him develop strong writing skills. Marilyn F. Hanson, a Memorial High School teacher, connected him to UW researchers and advised him as he conducted original research to enter the Westinghouse Science Talent Search competition.

“She really exposed me to the whole world of scientific research that led me to be excited about technology.”  Marwell says of Hanson [who received a Presidential Award for Excellence in Science Teaching in 1984.]

Marwell was well prepared academically to succeed at Harvard University, where he received a bachelor’s degree and an MBA. He parlayed that Ivy League education, network and cachet into a series of lucrative startups in the telecom, software, consumer retailing and hedge fund industries.

Then in 2012, he found himself at an inflection point.

For the first 20 years of his career, he was chasing a vision sold on a popular TV advertisement in which a father walks along the beach with his young son on his shoulders. “I thought I wanted to be that guy on the beach, retired at 35, living a life of leisure,” Marwell says. “It turns out that is not how I am built. I am at my happiest when I am working on a big problem.”

Inspiration came in the form of a balky Internet at his daughter’s school, which prevented students from completing an assignment because of slow video connection.

He soon learned that the situation was far worse, with only 10% of public school students having access to the fast Internet connections needed to access the learning resources and opportunities found online.

Marwell launched EducationSuperHighway in 2012 with a goal of bringing broadband to all public classrooms. As CEO, Marwell helped engineer a bipartisan effort involving federal and state politicians and education officials supported by EducationSuperHighway and other K-12 advocacy organizations.

The organization was winding down when the Covid-19 pandemic hit and many school districts shifted to remote learning revealing a huge lack of strong internet connections for students learning from home. EducationSuperHighway sprang back into action by helping connect 3 million students to broadband in eight months.

Seeing the political will and funding coalesce to close America’s digital divide, Marwell rebooted the organization and pivoted EducationSuperHighway to a new mission in 2021: bringing high speed Internet to the 18 million households across the country (273,415 households in Wisconsin) that can’t afford to connect.

"This is the first and maybe the last chance ever to really make dramatic progress in closing the digital divide," Marwell says.

So he is delaying retirement and the beach life again and marshaling the creativity and strategic thinking skills sparked so many years ago in Mrs. Murray's class to tackle this new challenge.

"Turns out, when you wake up every day knowing that something you do today is going to make the world a better place to be, going to impact someone else's life for that better, that's a heck of a way to go through life."