Sylvia Annelise and the Importance of Public Art 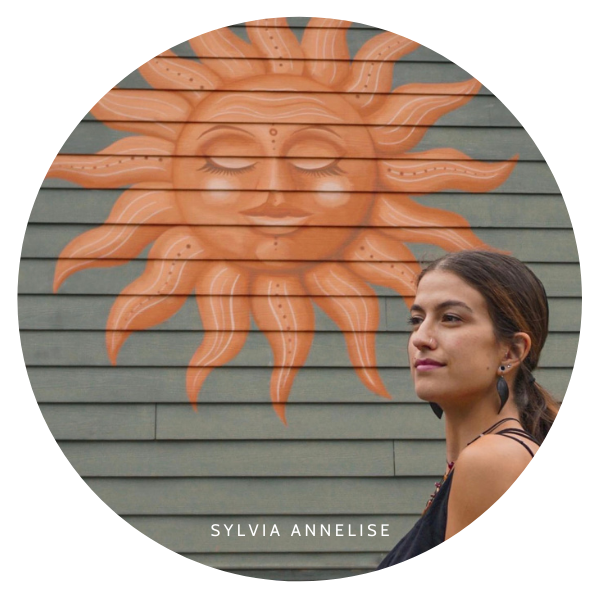 “I loved growing up in Madison, my parents were very intentional about having me know where home was,” Sylvia A. Hecht says. “Madison is where they wanted to raise a family, and the schools were a big part of that.”

Her parents have a dynamic and international background, but in the early 80s Madison quickly became their forever home.

Born and raised on the near east side, Sylvia attended all east side schools. From Lapham to Marquette, to O'Keeffe and Madison East High, she views herself as a true Madisonian.

“As a kid I was very theatrical and sought adventure. Ms. Najem encouraged me to embrace that self- expression.”

Growing up in Madison, Sylvia has been exposed to a lot of diversity. Feeling fortunate, Sylvia became excited about hearing new perspectives, meeting new people, and embracing other cultures. “Madison is a place where being different is not a bad thing,” she says. “Actually, it’s encouraged.”

From excelling in performing arts, to doodling on the corners of notebooks, her teachers and family members always encouraged her to embrace creativity. Even before she was 18, she gained praise for her unique perception of the world and always thinking outside of the box.

The older Sylvia got, the more clear it became she was bound to travel and create. What wasn’t yet clear was how these two passions would come together.

When Sylvia graduated from East High School in 2015 she, like many high school graduates, pursued a college degree in a financially secure subject. A security blanket of sorts, something to make students (and their parents) feel better about the money being invested in their education. “I thought I had to go corporate, do something in marketing, or be the art director for some big company. I thought I had to seem employable.”

While at UW-Madison double majoring in fine arts and communications it started to become clear that although she enjoyed her classes and even embraced formalized learning, she wasn’t succeeding at finding her creative voice. She realized she wasn't creating it for herself, or even for someone else. She was creating for a grade, to earn a degree she was unsure how to use. Feeling discouraged, she took some time off  and left to  travel around Latin America where she picked up her first brush.

Sylvia never considered herself a painter, nor did she plan to pursue visual art full-time. It was only when she landed in Tulum, Mexico, in 2017 that she created her first large mural for a hostel on the coast (pictured left). In that instant, her talent was actualized.

Thrilled with the transformational effect of large murals, their ability to shift mood and shape ambiance, she knew she was onto something special.

“I realized that creating out in the world was a lot more fun than creating it in a studio,” she says. “Being able to travel and support myself by making art was something that was never posed to me as an option as a young adult.”

After painting extensively in Latin America and Africa over the past two years, Sylvia slowly started making her way back to Wisconsin.

Upon her return, she quickly got to work, creating her biggest mural right here in Wisconsin in the fall of 2021. The 1,500 square foot artwork, titled Sanctuary (pictured below), is painted on the side of The FireHouse bar in Eau Claire.

Eau Claire is a tourist attraction for people in the surrounding towns and cities, many of which had never been exposed to public art. Enjoying the impact her mural has on children and families, she became inspired to develop an initiative to support the creation of more public art.

“It felt like a privilege to create the Sanctuary and help shape what role art has in people's lives,” says Sylvia. “There is a transformational power in community art. There are huge communities of mural art in Latin America, but not here. I came back with a desire to change that.”

Sylvia founded the Public Painting Project (PPP) in early 2022, with Jo Ellen Burke, former chair of the Eau Claire Public Arts Council. They recognized that although there was enthusiasm for new public mural art in Eau Claire, there was nothing consistently supporting it. “The funding has been sporadic, and I want to make the creation of new murals into a foundational part of Eau Claire's urban development and arts ecosystem.”

The Public Painting Project is hosting mural painting workshops while developing a database of mural artists to connect prospective clients with qualified local creators. She believes that public art and placemaking are crucial aspects of any community's identity and its cultural and economic growth.

“I still don't know all the names of the brushes, or all the techniques,” she laughs. “That is what gets you the grades in school. I just know that I love it, and that is what makes me good at it. It’s my passion.”