Advancing Innovations in Teaching and Learning 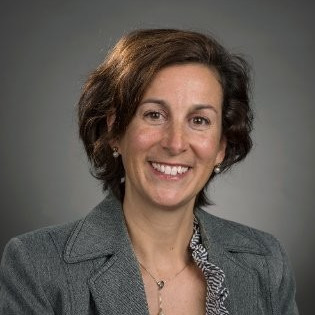 West High class of 1987 alumna Suzanne Dove credits much of her personal and professional success to the education she received from Madison’s public schools (Thoreau Elementary, Cherokee Heights Middle, and West High). So much so that she and her husband made the decision 13 years ago to return to Madison so their children could receive the same first-rate public school education that Suzanne had.

Currently the Founding Executive Director of the Badavas Center for Innovation in Teaching and Learning at Bentley University, Suzanne’s post-high school journey started with a cross country move to attend college on the East Coast. She received a Bachelor of Arts in European Cultural Studies from Brandeis University and a Master of Public Administration from New York University. Thereafter, the first phase of her career was in international development, living and working in NYC, Spain, Latin America, and Washington, DC.

Suzanne met her husband, Miguel, when they worked together in Barcelona. They moved to Washington, DC where they both worked as international development professionals and traveled extensively. When they relocated to Madison in 2007, they were grateful to find a home in the same neighborhood that Suzanne had grown up in – allowing their children to be close to one set of grandparents, and to attend the same set of Madison public schools as Suzanne had. While the move back to Madison meant a career shift for Suzanne, she has enjoyed her work in higher education administration for the past 13 years (12 of them being at the Wisconsin School of Business at the University of Wisconsin-Madison, most recently as assistant dean for academic innovations).

As Suzanne reflects back on her MMSD education, how it shaped her life and career, and what she hopes her children might also gain from it, two things in particular stand out. The first is the incredible support that she received from her MMSD teachers, both around her desire to become a stronger writer and her interest in social justice issues. The second is her love of learning languages, especially inspired by Spanish teacher Andrew "Señor" Zintel at West High School, which led her to spend two years of college studying in Madrid and ultimately enabled her to be hired for a position at a university in Barcelona. Today, Suzanne and Miguel’s household is Spanish-speaking and both kids are enrolled in MMSD’s Dual-Language Immersion (DLI) program.

Ultimately, Suzanne’s return to Madison has offered her the chance to reconnect with Madison’s public schools and invest in new ways: now as a parent, an alumna, and a board member of the Foundation for Madison’s Public Schools.