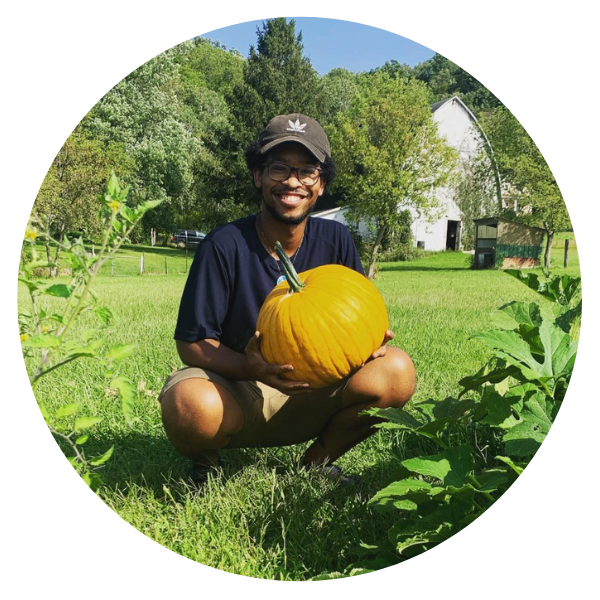 From an early age Alex Booker knew the importance of having hands in the soil. Booker’s grandparents were farmers in Mississippi, a skill that turned out to be generational. Booker started gardening when he was just 10 years old by caring for plants around the house. His mother saw not only the passion but the skills that Booker had for gardening and encouraged him to embrace it and provided him with the tools he needed to garden more extensively at home.

After many years of taking care of plants around the house, garden, the neighborhood, and local businesses Booker decided it was time to make his passion his business, and Booker Botanicals was born.

“I had always been doing indoor plant care and garden maintenance, but this was my first time really getting out there.” says Booker, reflecting on the start of his business journey. Founded in 2021 Booker Botanicals is an urban agriculture business based out of Black Earth working to promote farming access and healthy food options throughout the Madison area. As Booker shared more about his business and spoke excitedly about all the possibilities the future holds, he opened up about how his foundational skills he uses are rooted in his k-12 education.

Booker went to all Madison east side schools (Hawthorne, Shank, White Horse, La Follette). Booker’s time at White Horse was unlike any of the years before because the district had just redone the bus lines in an effort to diversify the schools and create a more collective and diverse learning environment. Once Booker headed into 9th grade at La Follette High School, he recognized his own learning style. Booker did best when he took his more challenging classes such as math and sciences in the fall, and arts and literatures in the spring. For Booker, he realized that his learning, like most things, came in seasons.

Booker started delving deeper into the sciences his first year at La Follette because of a teacher who encouraged him to explore his interest in the subject. “Mr. Harris was my Freshman Biology teacher who recognized my interest and encouraged me to do honors sophomore year. For me it had less to do with the subject, and so much more about how it was taught. A great teacher changes everything.”

Once Booker graduated from La Follette High School in 2016 he went to Edgewood College, where he struggled to find his footing. “Edgewood was tough because my k-12 schooling was so diverse, and Edgewood was not. I was used to being surrounded by a variety of cultures and races, I started to feel like I didn’t belong there.”

During Booker’s time at Edgewood, he was active in social justice clubs, becoming a voice on campus for the black and brown students. Things were looking up for Booker given the circumstances. He became an RA for one of the dormitories and found a group of friends that made him feel at home. It was not until the 2017 elections when someone broke into Booker’s apartment that he realized Edgewood was not a place for him. “After the 2017 election, there were a lot of hate crimes on campus. Alongside my aunt losing her long battle with Cancer, I realized Edgewood just was not for me. So, I dropped out.”

Since leaving Edgewood in 2017, Booker spent time working for a few non-profits in and around Madison, but something deep within him was pulling him back into the garden. In 2021 he gave into his passion and Booker Botanicals was born.

Business at Booker Botanicals has been booming since the very beginning. “I sold vegetables within the first few months. I did small workshops here and there with food systems and food sovereignty, and people started to notice.”

Alongside Booker’s business, he also works at Badger Rock as the assistant farmer for their MSCR (Madison School & Community Recreation) workshops. Although they mainly work with the students at Badger Rock Middle School, they are serving a wide variety of students from middle school all the way to those in senior living. They also have nine chickens on the Bager Rock farm plot that the students helped to raise and are active beekeepers.

Booker re-enrolled at Edgewood college this past summer and plans to graduate in the spring of 2025. Booker hopes to become a therapist in the black and brown community and open a holistic retreat center in the area. Although he will be back in the books, ensuring his community has access to healthy farm to table options is his top priority, and he will continue to sell products privately and at farm stands across the city. Follow Booker Botanicals on Instagram and Facebook to bring healthy and local farm products on your kitchen table this season.