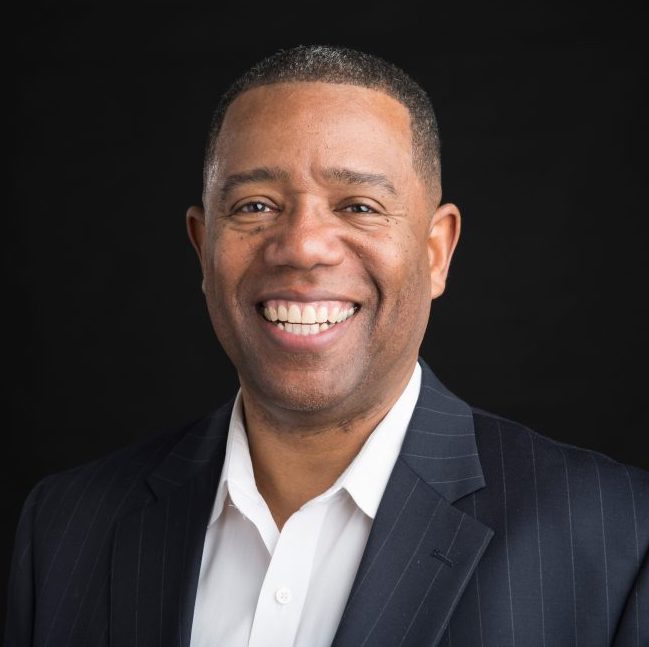 West High class of 1981 alumnus Dr. Alex Gee is the Lead Pastor of Fountain of Life Covenant Church, a multiracial, multigenerational and multi-class congregation in Madison, WI. He is the most tenured Senior Pastor in the entire city. He is also the host of the Black Like Me podcast as well as the president and founder of The Nehemiah Center for Urban Leadership Development, a non-profit organization that inspires, develops and mobilizes emerging African American leaders to become partners in revitalizing and transforming our community. His passion lies in promoting inspiration, transformation and justice for disenfranchised African American people, for the benefit of the entire city.

Gee is nudging his local community to rethink racial disparities in Madison, WI, through an incredible citywide movement called Justified Anger, named after a stirring front page essay he wrote about his experiences growing up in Madison as a Black man. Since its launch in 2013, the movement has has produced a comprehensive framework designed to unify Madison's divide called “The Our Madison Plan”, mobilized over 1,000 non-black allies into the community, and gained Gee national attention for this work.

Over the past several years, Gee’s efforts have included educating, coaching and mobilizing white allies, as well as building capacity and networking opportunities for Madison’s Black emerging leaders, in order to build social cohesion that will lead to the creation of sustainable solutions for addressing our problems together. Dr. Gee is also the central figure in Justified Journey, a new documentary that uses his family’s story to illustrate the vastly unequal outcomes for Black and white Americans.

In recognition of his efforts, Dr. Gee has received numerous honors that range from The City of Madison’s Rev. Dr. Martin Luther King, Jr. Humanitarian Award in 1994, to being invited to offer an inspirational message at the White House for President H.W. Bush’s staff. In 1995 the Madison Community Foundation honored him for his “Outstanding Contributions to the Community,” and he has been saluted by the Wisconsin-State Journal as one of the “Ten Who Made a Difference.” In 2009 Reverend Gee earned his Doctorate and his dissertation title was: Rediscovering Leadership Development Strategies for Fatherless African American Males. In 2015, he was named by Madison365 as one of the 28 most influential African-Americans in Wisconsin. He is also a published author of two books, an adjunct faculty member and a Spiritual Life Coach.

Dr. Gee is proud to be the brother, father and cousin of MMSD graduates, as well as the husband, brother, father and son of UW-Madison graduates. In fact, his extended family has received 13 degrees in total from the UW-Madison and their legacy is featured in this Why I Love UW documentary produced by the University. When he reflects back on his days at Leopold, Lincoln (which used to be a middle school) and West High, he can say with certainty that they prepared him well for college, and credits much of it to the teachers who called out his intelligence and leadership. "I was the class clown. I did not take myself seriously in high school. So the fact that they took me seriously and cared about my education was really something," says Dr. Gee. One of those teachers in particular was Ms. Soder, a math teacher at West High. "I hated geometry and failed one semester of it my junior year," Dr. Gee remembers, "but Ms. Soder stopped me in the hallway one day to ask about my plans for college. The fact was, I had applied to the UW-Madison but needed one more geometry credit to be admitted. I asked Ms. Soder that day if she could create a geometry final just for me, and if i passed, I could receive that credit I needed to go to the UW. Well, she created it, I passed it, and I went on to meet my wife and a number of other important people in my life at the UW-Madison. Ms. Soder changed my life that day when she stopped me in the hallway and cared enough to ask about my post high school plans.... I credit West High to so much of my success that I saved my letter jacket and said one day I would get married, have a child and that child would go to West and wear it. Well, my daughter Lexi did just that."

As the chair of his class's reunion planning committee, Dr. Gee is looking forward to their 40th next year. "I built so many cross-cultural friendships during my time at MMSD. Some of the best friendships of my life were made at MMSD."

To learn more about Dr. Gee, please visit his website >>